Incentive wage is a complex topic

More work – more money! This principle works if all parameters are taken into account and all participants adhere to the rules of the game. Incentive wage is a complex topic, it offers many risks and opportunities, many friction points but above all an improvement of the situation for those who are prepared to increase their performance. Of course, this does not necessarily mean doing the work quicker, but often more so looking at the way in which the work is carried out. There are many different forms of incentive compensation, from profit-sharing to the classic piecework rate:

The most effective method, however, still is the time-degree method. Here, a defined target value is set in relation to the actual time value consumed. If the time consumption is less than the specified value, the efficiency rate rises to over 100%. This procedure applies to both the classical piecework scheme and the premium wage system. The two systems differ mainly in the design of the wage line. While the chord has a linear course, premium systems try to steer the performance level into a certain target corridor via different gradients or curves.

PREMIUM WAGE AS A FLEXIBLE COMPONENT OF INCENTIVE WAGES

While today’s premium wage systems are much more modern, we still manage a large number of piecework systems in the industry. The changes in processes and products require constantly adapted lead times. It is not uncommon that we find average performances of 140% or more. If you look at a person’s ability to perform, it quickly becomes clear that an achievement of more than 130% is not actually possible in the long term, and that at a certain point it can be damaging to a persons health. The adjustment of target times to normal performance is a difficult process, as the additional earnings taken for granted have been factored into the private financial plans of the employees. For these adaptations, we have developed measures and plans in a wide variety of projects that allow a socially acceptable transition.

Another problem with many chord systems are the “red bills”, which are often issued when there are gaps to be bridged or when there are no default times. In extreme cases, this proportion can exceed 50%. Additionally, there is the wage drawer in old piecework systems. Here “surplus” default times are being collected for bad times, which then flow back into the operation, should chord minutes be missing to reach the known billing level. Here, not only the functionality of the incentive wage system has to be questioned, but there is also a lack of operating data for planning, control and calculation. In these cases, quick remedy is required. We have developed the “electronic drawer” for this special case and have already successfully implemented it several times.

When it comes to the introduction of a new incentive wage system in companies, we now basically implement premium wage systems. If feasible, we then develop combined quantity and quality premiums. Whereas in the past the quality aspect tended to focus more on reacting to increasing error rates through the quantity incentive of a premium, today quality standards and consistent supplier evaluation are becoming increasingly important. 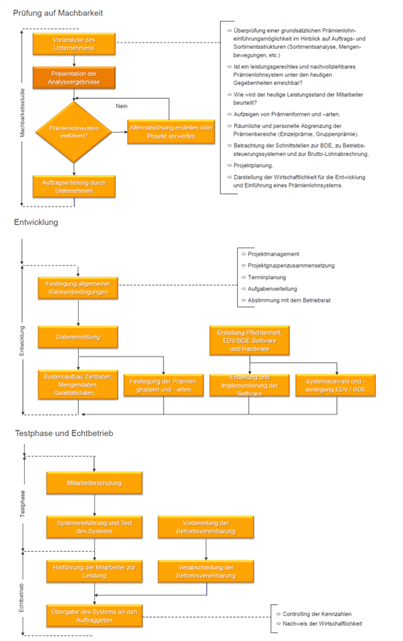 Together with our IT specialists, we have been developing a unique software for the development, implementation and live operation of incentive wage systems for almost 20 years: PROCESS PM. As a central module within the PROCESS SUITE, this application can cover even the most complex requirements, from time modules to gross payroll accounting.

For the introduction of a bonus wage system, we have developed a methodical approach that has proven to be very successful in all projects to date:

If you have any further questions on this topic, please do not hesitate to contact us. We would also be pleased to arrange contact persons from the field (managers and works councils) who have already successfully implemented their performance-related pay system.

Please do not hesitate to contact us for more information about incentive wages!